Since 2001, a small ex situ (outside its natural habitat) population of the Lemur Leaf Frog of Costa Rica has been kept at Manchester Museum, and more recently also at Bristol Zoo, where a special breeding facility has had great success.

In order to maintain a genetic variation among the zoo population, Nordens Ark has been asked to keep its own assurance population of the Lemur Leaf Frog. Each individual has been genetically mapped to allow the project to put together breeding pair with the goal to maximize genetic variation in future generations of frogs. Nordens Ark will initially be responsible for three ‘bloodlines’. Every frog within the project has its own ID card so we can be certain exactly which genetic make-up any individual has.

One of Nordens Ark’s amphibian conservation facilities, which is equipped to keep frogs in a biosafe environment, has ten terrariums designed specifically for holding Lemur Leaf Frogs. Lighting as well as temperature is adapted to this species. The frogs will be kept in the terrariums with their siblings (three males and three females). At mating time, males from two terrariums and the females from two others might, for example, be moved to a special mating terrarium where we can replicate the rainy season in Costa Rica – the time when Lemur Leaf Frogs in the wild gather for spawning.

When the frogs have laid their eggs, which they do on leaves hanging over water, it’s time to move them back to their terrariums. The plants with the eggs on are then taken to aquariums designed for rearing the tadpoles. DNA samples are taken, either from the eggs or from the tadpoles, to establish which two frogs are the parents of each individual. The eggs hatch after about a week and the tadpoles drop into the water below. They remain as tadpoles for between 70 and 100 days, after which they metamorphose and enter the terrestrial environment as small frogs with adaptations to survive land. The water quality in the mating terrariums during this period is critical, so the aquarium in the bottom of each terrarium is connected to large biological filters which, together with routine water sampling, assure optimal conditions for the tadpoles.

The organisations involved in the project will continually move frogs around among the participants to ensure a genetically healthy backup or assurance population. 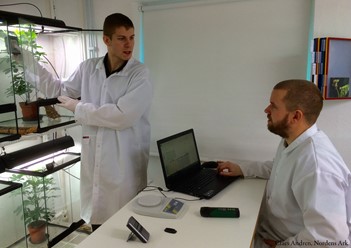