This summer, five small chicken frogs have hatched on Nordens Ark. The world's amphibians are acutely endangered and several are on the verge of extinction. The mountain chicken frog is one of the species that has basically disappeared from the wild. This year's five young are therefore crucial for the work to save the species.

The mountain chicken frog, which is one of the world's largest frogs, was previously common in the eastern Caribbean archipelago. Today it is only found on Montserrat and Dominika and not even there it is certain how many are left.

-That is why the five small frogs that hatched here at Nordens Ark this summer are crucial for the species' survival, says Kristofer Försäter who is responsible for the project at Nordens Ark. The goal is to be able to release frogs born on Nordens Ark into the wild in the future and that within 10 years there will again be a viable population of mountain chicken frogs on Montserrat. 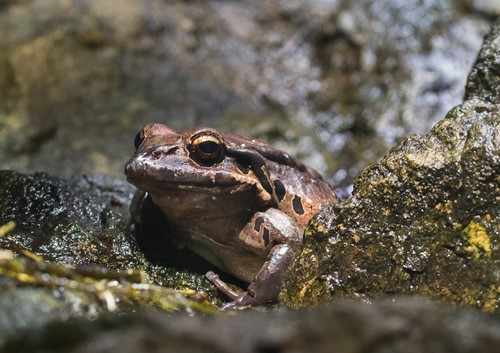 Under controlled conditions, chicken frogs are bred so that they can eventually be released into the wild. The rescue work also involves on-site work in the Caribbean with inventories of frogs in the wild, restoration of destroyed environments and research projects with, among other things, solar-heated ponds to protect the frog against the deadly chytridiomycosis disease caused by the fungus Batrachochytrium dendrobatidis.

-When people moved in to the islands they brought with them cats, dogs and even mungos which was devastating for the species, Kristofer continues. In addition, the climate change in recent years with tropical storms and hurricanes has significantly reduced the frogs' ability to find suitable habitats.

Chicken frogs are bred at Nordens Ark, Jersey Zoo, Chester Zoo, Bristol Zoo and London Zoo, all of which are part of the joint international project Mountain Chicken Recovery Program.

On our YouTube channel Kristofer tells you more about these frogs.