When a species is functionally extinct in the wild, the situation is serious and the species has little to no chance of recovery on its own. Therefore, the newly hatched vietnamese pond turtles at Nordens Ark is extra important. Six small turtles of about 10 grams each hatched this summer.

"These young turtles are very important," says Jimmy Helgesson, who is responsible for the turtles at Nordens Ark. "If the species is to survive, breeding efforts must continue so that someday in the future the species can be released back into the wild.” 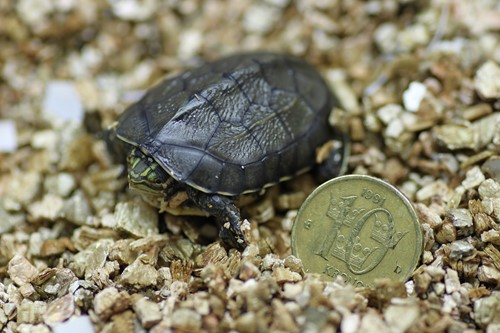 The Vietnamese pond turtle is one of the 25 most endangered turtle species in the world, native to central Vietnam. The species is considered functionally extinct in the wild and is threatened mainly by the illegal pet trade, but also due to its natural habitats are destroyed. Today, the species lives in such small and scattered populations that it will not survive on its own.

The turtles at Nordens Ark are the highest ranked individuals in the breeding program and their genes are unique and important for the survival of the species. So important in fact that they were the only ones allowed to reproduce this year.

"We don't know yet if they are females or males," Jimmy continues, "it will take six to eight years before you can see it. Instead we will send blood samples to a lab to get answers made on a chromosome level."

Turtles grow slowly and can grow old, the couple on Nordens Ark is 35-40 years old. Eventually, the newly hatched turtles will be sent to other breeding facilities for the purpose of multiplying and helping to save the species.