At the end of June, two Red Panda cubs were born Nordens Ark in Sweden. Via a live camera in the den, you can now follow them and their mother around the clock!

The Red Panda is listed as Endangered on the IUCN red list and there may be as few as 2,500 remaining in the wild. Hopefully, the live broadcast will help to raise awareness for the species and its situation in the wild.

The birth of Red Panda cubs is not that unusual at Nordens Ark. The species has been in the park since the park opened in 1989 and over the years 24 cubs have been born, but this time we were lucky enough to be able to follow the birth via live camera. 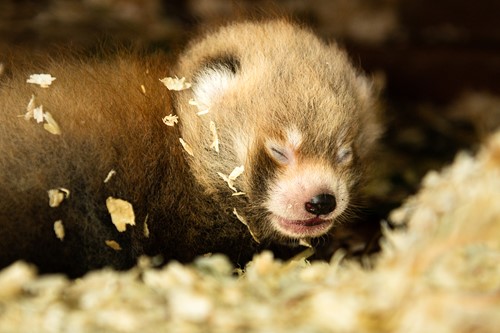 -It was on the evening of 20th of June that I could see on the camera the female start moving around a lot and I noticed an increased frequency of licking, says Fanny Svensson, animal keeper at Nordens Ark, and after that it didn’t take long before the first little cub appeared on camera.

Cameras in the dens are primarily installed as a tool for the animal keepers to be able to observe the animals without having to go in and disturb them.

The cubs are still very small and confined to the den. During the first few weeks they are mostly observed sleeping and suckling and making a few attempts at crawling. Red Pandas are born blind and it also takes a few weeks before they open their eyes. They will gradually become more and more active and begin to explore the nest, climb on different structures and eventually start venturing out in the enclosure with their mother. However, already now some lucky visitors have managed to see a glimpse of them when the mother moved them from one den to another.

- This is a natural behavior. In the wild, Red Panda mothers will often move their cubs from nest to nest - dens are typically in a hollow tree or a tree stump that are lined with leaves, grass, moss, and tree branches, says Emma Nygren, Head of Conservation programmes at Nordens Ark. Emma continues - the female does this to protect the young from predators and thus ensure their survival.

The Red Panda is an indicator species of the Eastern Himalayan Broadleaf and Conifer Forest; one of the planet’s richest biodiversity hotspot. Like many other species in this area, it is threatened with extinction and the main threat are habitat loss and degradation, human interference and poaching.

Nordens Ark is partnering with Red Panda Network to conserve the Red Panda through establishment of Centre of Conservation and Sustainable Living while at the same time contributing to improving living conditions for the local community. The Center will serve as a hub for conservation, education, and sustainability, while also increasing the annual income of over 2,000 local families. The project is possible thanks to the generous support of the Swedish Postcode Lottery.

- The Red Panda cubs are an important addition to the European breeding programme for the species. They are also important ambassadors who will hopefully help us raise even more awareness about the threats against the Red Pandas and what needs to be done to save the species in the wild, Emma concludes.