The tiger is the world's largest feline and a symbol of strength and courage. A few hundred years ago, there were about 100,000 tigers in the world, from Turkey in the west to Russia in the east. Today the situation looks completely different and only a remnant of the number of tigers remains in the wild.

The threats to the world's tigers have been and still are many. Historically, large-scale hunting and extermination campaigns have been conducted to reduce the number of tigers. Today, the tiger is mainly threatened by illegal hunting to satisfy the high demand for tiger skin and skeletal bones for the production of tiger brandy. They are also threatened by the disappearance of their habitats when forests are cut down and converted into, among other things, arable land or palm oil plantations. One effect of the shrinking habitats is also that conflicts between humans and tigers are increasing. Tigers are large and dangerous predators and see human livestock as easy prey, which can lead to large economic losses for the people who live near the tigers.

Nordens Ark has been working since 2011 to protect and increase the population of Amur tigers. The Amur tiger (Panthera tigris altaica) is the northernmost subspecies of tiger and it lives in the Russian Far East. The number of Amur tigers in Russia has been estimated at 430–500 individuals, which means that it is classified as endangered by the International Union for Conservation of Nature (IUCN). 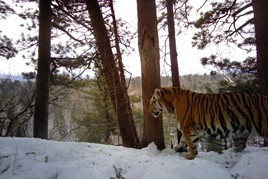 Together with the WWF and WWF Russia, Nordens Ark runs the project "Northern Tiger", a project to preserve the endangered Amur tiger in the Russian Far East. Our long-term goal with the project is to ensure a sustainable development of the Amur tiger population in its northernmost distribution area. The project was started in 2011 with funding from the Swedish Postcode Lottery and the efforts are focused in and around Anuisky National Park north of Khabarovsk.

To ensure the survival of the Amur tiger, we focus on increasing protection and secure food supply for both the tiger and its prey. Through more patrols and controls, the project works to combat poaching and illegal logging. The national park has been equipped with protection patrols, guard stations and vehicles to make it easier to get around the large areas. Even outside the national park, surveillance has been intensified through cooperation with local authorities. Thanks to the work, illegal weapons, traps and animal parts have been confiscated and culprits arrested. Winter feeding is a central part of the work to increase the survival of wild boar, deer and red deer, which in turn ensures the food supply for the area's amur tigers.

The project also works to develop and increase ecotourism to the national park and to involve the local population through a number of different educational initiatives. As the number of tigers increases, so does the number of conflicts between humans and tigers. The project therefore supports a conflict group, which works to manage and resolve these conflicts. In order to be able to follow the tiger's population development, we are also actively working to improve the inventory methodology by, among other things, increasing the use of camera traps.

Our work has yielded results. When the work started, there were an estimated 6-7 Amur tigers in the area. Thanks to our efforts, the number has now tripled. The tigers also spread north and west.

News from the project

There has been a lot of snow in the Russian Far East during the winter of 2021/2022, which means difficult challenges for the area's wildlife. The snow depth can lead to many ungulates and wild boar dying due to starvation or falling victim to poachers who use the snow depth to hunt. This can also have major consequences for the area's Amur tigers if a large number of their prey animals die during the winter. Our partners will of course expand the winter feeding of wild ungulates and wild boar within our project areas to hopefully reduce the impact of the difficult winter conditions and we will continue to support the groups that fight poaching and manage conflicts between predators and humans.

Watch this film and learn more about what our project has achieved (in Swedish).

WWF and The Swedish postcode lottery.