The Pallas's cat (Otocolobus manul) is a small feline that lives among the mountains and grasslands of Central Asia. The species has a large distribution area that includes 16 countries and extends from Iran in the west to China and Mongolia in the east, but its actual occurrence in the distribution area is largely unknown.

The Pallas's cat is not threatened from a global perspective, but many of the populations in the distribution area are small, isolated and declining and the species risks local or regional extinction. The species is threatened by the destruction of its habitats, they are killed by domestic dogs, they get caught in traps intended for other species and their natural prey such as rodents and piphars are poisoned.

The Pallas's cat is one of the world's least studied felines and the lack of knowledge is something that limits the development of targeted conservation measures for the species. To improve our knowledge of the species and at the same time improve the global conservation measures, Pallas’s cat International Conservation Alliance (PICA) was established. PICA is an international collaboration between Nordens Ark, the Royal Zoological Society of Scotland, the Snow Leopard Trust and Fondation Segré. 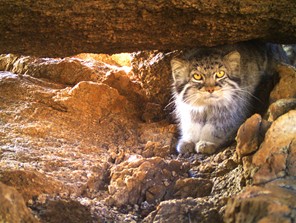 An important part of this work is to promote cooperation between different stakeholders and PICA works closely with Pallas's cat Working Group, IUCN Cat Specialist Group and other researchers and Pallas's cat experts. By working together with this extensive network, PICA has played an important role in the coordination and development of the species' first global conservation strategy.

To support various conservation initiatives in the spreading countries, PICA started the PICA Small Grant Program in 2020. Here, researchers and organizations can annually apply for money for various projects that will increase knowledge about the Pallas's cat and the threats that the species faces. Through PICA, we currently support 11 research and conservation projects in 8 different distribution countries.

An important element in all conservation projects is education and information. If people do not know the species we want to preserve, it is unlikely that they will show interest or support for the conservation project. This is of course extra important in areas where the local population is directly affected, both negatively and positively, by the species we work with. PICA works on several fronts to spread information about the Pallas's cat. The focus is on disseminating knowledge in the countries of distribution but also to zoos around the world. Among other things, we have developed a standardized educational material, translated into several languages, which can be used in several different countries and produced a children's book together with United For Literacy and IUCN Cat Specialist Group

The results of three interview studies conducted in Mongolia, Kyrgyzstan and Nepal are currently being compiled. We investigate how big a problem it is that Pallas's cats are injured or killed by dogs and what can be done to reduce the problem. We are also working with experts to produce a document with guidelines on how to best monitor the wild Pallas's cat population.