The mountain chicken frog (Leptodactylus fallax) is one of the largest frogs in the world found only on the islands of Montserrat and Dominica in the east Caribbean Sea. The species is listed as Critically Endangered (CR) on the IUCN red list.

The species has had a rough time in the wild. First threatened by habitat loss, introduced predators and over-exploitation, it has been brought to the brink of extinction by the introduction of the fungal disease Chytridiomycosis onto both islands. The wild population across both islands is currently estimated to be about 100 individuals.

In response to these population declines, an ex situ safety-net populations were established in 2009 at several institutions across Europe. The Mountain Chicken Recovery Programme (MCRP) is a collaboration between Nordens Ark, Chester Zoo,  Durrell Wildlife Conservation Trust, Paignton Zoo and the Zoological Society of London and the governments of Montserrat and Dominica. The goal of the programme is to save this species from extinction.

What we do at Nordens Ark
When the fungus was found on Montserrat a rescue mission was done to save 50 of the last healthy mountain chickens off the island and send them to zoos across Europe. These individuals were used to establish an ex-situ safety net populations. Nordens Ark joined these efforts in 2015 by building a breeding facility where a group of Mountain chickens are kept under quarantined conditions.

The frogs live in large terrariums, with interior, lighting and temperature regulated to mimic the conditions of the frogs’ natural habitat. Keeping frogs under quarantine conditions means, among other things, that the animal keepers have change clothes and shoes before entering the facility and follow strict to do clothing and shoe change to carry out care and follow strict quarantine rules, which means that the facility is not open to the public. 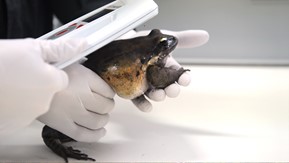 The MCRP has conducted significant research and developed management techniques to prevent extinction of the mountain chicken but no methods have yet been successfully developed to mitigate the impacts of Chytridiomycosis on the species in the wild. As efforts on a global scale have so far failed to develop a cure for chytridiomycosis, it is recognised that intensive long term management of the mountain chicken will be required. The next phase of the programme on Montserrat involves the construction of a semi-wild enclosure where we can test the ability of captive-bred frogs to coexist with chytrid infection through environmental manipulations to create conditions that may be suitable for the frogs but suboptimal for the fungus.

News from the project
After several years of hard work, we managed to get one of our females to spawn three fertile litters during 2020. In 2021 we could improve our work even more, and now four unrelated females have bred at least one litter each which is an amazing. These new little frogs are crucial for the future of the species.