The European wildcat in Scotland

The wildcat (Felis silvestris silvestris) is one of Britain's most endangered mammals and the species is on the verge of extinction in the country. The species was once common throughout the UK but today there are only about a hundred individuals left and all are found in Scotland. Historically, the wildcats have been threatened by the disappearance of their habitats and by human persecution, today they are mainly threatened by hybridization with domestic cats and diseases. This has led to a sharp decline in the wild population.

In 2019, the IUCN Cat Specialist Group stated in a report that the wildcat population in Scotland is no longer viable. The report also stated that in order to save the species in the wild, the remaining population must be strengthened by breeding and releasing wildcats. To re-establish the wild population of wildcats, the European collaborative project Saving Wildcats (#SWAforLife) was therefore launched. Saving Wildcat's goal is to prevent the extinction of wildcats in Scotland by breeding and releasing the species into the wild. 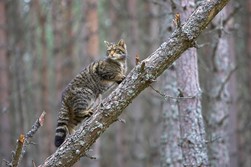 Saving Wildcats is a collaboration between the Zoological Society of Scotland (RZSS), Nordens Ark, Scottish Natural Heritage, the Cairngorms National Park Authority, Forestry and Land Scotland and Junta De Andalucía and the project is possible thanks to funding from EU-LIFE.

In order to produce a large number of wildcats for release, a unique breeding center has been built near Cairngorms National Park in Scotland. The breeding center is run by RZSS and consists of a number of breeding enclosures, a veterinary department and specially designed release enclosuress. To complement the Scottish breeding center and reduce vulnerability, Nordens Ark will also hold a number of breeding pairs of wildcats and produce young for the release project. A breeding pair will be in the public part of the park, but the main part of the work will take place in Nordens Ark's closed breeding facility. There we have built two large breeding enclosures in natural terrain where the wildcats will be able to prepare for a life in the wild.

Releasing species into the wild is complicated and there are no guarantees of success, but Saving Wildcats has brought together specialists from around the world with unique knowledge and expertise to give wildcats the best chance of survival in Scotland. In addition to working with the release of wildcats, the project will also work to reduce threats in the wild by, among other things, creating domestic cat-free zones and thus preventing further hybridization with domestic cats.

News from the project

In 2022, Nordens Ark breeding enclosures will be completed and we will import new breeding pairs. The hope is that breeding pairs during the year produce young that can then be sent to Scotland in the autumn of 2021, where the first release is planned for 2023 in Cairngorm National Park.

Read more about the project on https://savingwildcats.org.uk/