Butterflies have declined drastically in our cultural landscape over the past 50-70 years. Extensive and gradual changes in the landscape with more intensive use of the land have led to a reduction in several important habitats for the butterflies, such as flower-rich soils and semi-open forests, in both numbers and areas. Today, there is only few remnants of these environments.

One of the species that has declined sharply in the Nordic countries and in Sweden over the past 30 years is the chequered blue (scolitantides orion). The overgrowth of its habitat is considered to be the greatest threat to the species which is now classified as critically endangered on the Swedish Red List. 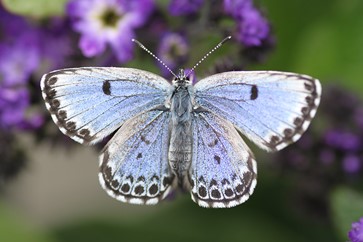 Today, the chequered blue is found in fewer than 10 premises in the country and the distribution stretches in a narrow band from Västra Götaland east to Östergötland and further up towards the Stockholm archipelago.

What we do at Nordens Ark
In order to preserve the chequered blue and in the future be able to strengthen the wild population, Nordens Ark initiated a breeding experiment in cooperation with the County Administrative Board in Stockholm. The purpose of the experiment is to eventually produce a large number of individuals for release.

Nordens Ark is authorised to, without harming the population, collect a number of eggs laid by wild females annually at premises in Stockholm County. The chequered blue is flying May to about mid-June. The females then  lay the eggs one by one on its host plant hylotelephium telephium.

Once the eggs have been collected, they are transported to Nordens Ark's purpose-built breeding facility where all breeding activities of endangered butterflies take place. The eggs hatch after about 2-3 weeks and larval development takes about a month depending on the weather and temperature.  A month later the larva becomes a pupa and the species then winters in the pupae stage. The pupa normally hatches after one year, but in connection with cold or wet periods at the time of hatching, it can overwinter for another year. 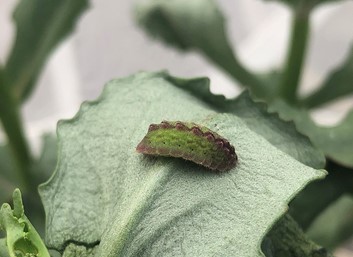 Fetörtsblåvingen has its own action programme for which the County Administrative Board of Stockholm has a national responsibility. The breeding experiment is only part of the measures taken to save the species. The relevant county administrative boards and municipalities are working to create better conditions for the species, for example by felling trees in environments suitable for the species, creating corridors between suitable premises, following up on the species' development and informing the landowner concerned about the status and natural values of the species.

Current in the project
In 2022, we started the very first release of chequered blue. The release took place by the Stockholm County Board placing 223 pupae on various islands to strengthen the existing population. We continue to develop the breeding method to make it even more efficient in the future.

In cooperation with County Administrative Board of Stockholm