The clouded apollo butterfly (parnassius mnemosyne) is one of Sweden's most endangered butterfly species and is found only in small and fragmented populations in Blekinge, in the border areas between Uppsala and Stockholm County and in Västernorrland County.  The species has declined sharply since the 1960s. The cause is not fully understood, but probably it's mainly due to changes in the habitat of the butterfly.

In Sweden, its habitat is mosaic meadows and pastures adjacent to deciduous forest edges with an abundant occurrence of the host plant corydalis.  This type of habitat has disappeared in large parts of Sweden, partly due to overgrowth, afforestation, exploitation and excessive grazing.

In order to slow down and reverse this negative trend, great efforts are required. The habitats of the species must be restored and appropriate management of the areas must be put in place.  As the species has a low dispersal capacity, breeding and release are also an important measure to bring the clouded apollo butterfly back into its former range. 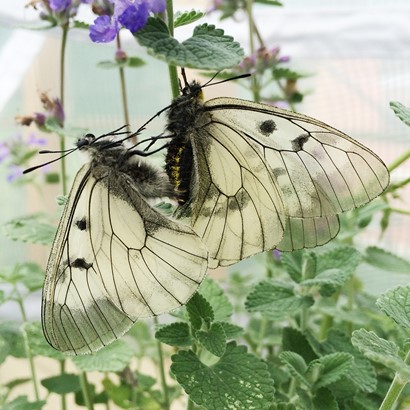 What we do at Nordens Ark
Nordens Ark has been commissioned by the county administration in Blekinge, Stockholm and Uppsala to initiate breeding work for the clouded Apollo butterfly in order to eventually contribute species for release in suitable premises. The work takes place within the framework of the action program for threatened species where the County Administrative Board in Blekinge is the national coordinator for the action program.

In order to build a breeding population of this species on Nordens Ark, a number of eggs have been collected from the populations of Blekinge, Uppsala and Stockholm. The collection is done without harming the existing wild population.

The breeding takes place in a purpose-built butterfly greenhouse on Nordens Ark. The eggs hatch in April and then the delicate larvae must directly find leaves of corydalis to eat. A month later they pupate. At the beginning of June, the fully formed white butterflies hatch and soon begin to mate and lay eggs. The eggs remain there until next spring. 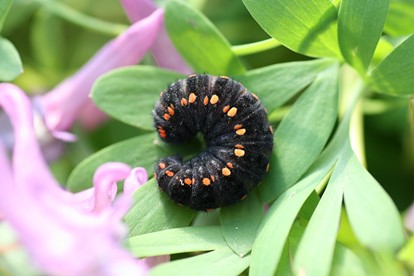 Current in the project - 2022
Development of the breeding method is ongoing. After this year's season, over 800 new eggs were produced. These are now winterized for the next breeding season. Release plans for the species are being developed in Stockholm, Uppsala and Blekinge counties, which are three of the four counties where the species is found today.

In cooperation with County Administrative Board of Blekinge and Uppsala