The white stork, Ciconia ciconia, is a popular bird around Europe and the species was for a long time something of a symbol of the southern Swedish agricultural landscape.  After a sharp decline in population in the early 20th century, the white stork died out in Sweden in the 1950s.

The extinction was a result of extensive excavations of wetlands made during the 19th and early 20th century to create arable land. In Skåne, 90% of the wetlands that existed at the beginning of the 19th century have been drained out and since this is where the stork found its food, it quickly died out.

The loss of wetlands across Europe is the main cause of the decline of the species throughout Western Europe.  A new major threat to the species in the wild is high-voltage lines as these are the most common cause of death both at breeding sites and along the migration routes. 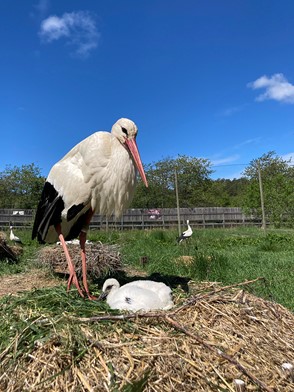 Nordens Ark has been collaborating with the Swedish Stork Project for several years to build up a wild stork population in Sweden. Nordens Ark holds about 12–15 pairs of storks in the wildlife park's wetland area. All the chicks hatched at Nordens Ark are sent down to Scania every summer to be released into the wild together with hundreds of other storks.

Before the storks are released, they are ringed, which is a prerequisite for being able to identify each individual at a later time. A number of storks have also been fitted with GPS transmitters. Thanks to these transmitters, we can follow the migration routes of the storks and thereby gain more knowledge of where and how they migrate. Nordens Ark also participates in the annual inventory of nesting storks in the wild, where all wild yearlings are counted and ringed. 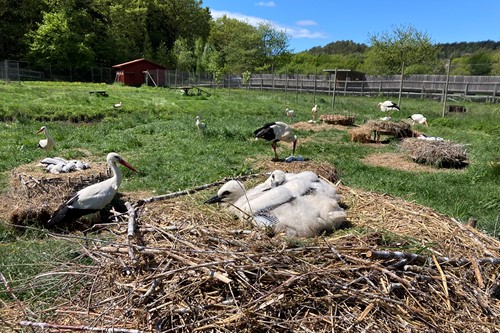 During 2022, 32 new breeding birds were imported from Poland to Nordens Ark. The majority of the birds moved further down to the Stork project in Scania, but 10 storks remained at Nordens Ark. These have started to settle here at Nordens Ark and we hope that they will start forming pairs for the breeding season in 2023. They will be released together with the rest of the group in 2024 or 2025 at the earliest.

After a good breeding season, 21 storks from Nordens Ark could be released into the wild during the annual stork release in Scania. A total of 94 storks were released, which is a new record! Of these, 10 storks were fitted with GPS transmitters, with six of them coming from Nordens Ark. Even in the wild, it was a successful breeding season this year and during this year's inventory, 107 stork chicks could be counted. 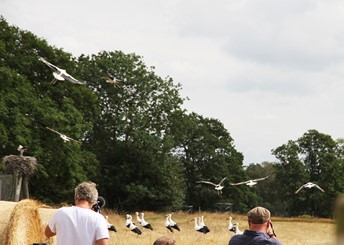 In collaboration with
The Swedish Stork Project