At Nordens Ark, male and female pairs are put in 5 terrariums. In each terrarium there are pieces of an oak trunk so the female has a natural place to lay her eggs. Mating and egg-laying takes place every day. In the wild, the residual energy from their hatching normally sees the adults through the three-week-long mating period. In order to maximise reproduction in our lab conditions, the beetles are given a nectar solution every day, and every second day a piece of fresh apple or pair. In this way we extend the beetles’ survival as adults by several months.

The oak where the female lays her eggs are examined regularly to find as many eggs as possible. They are small but relatively easy to spot, and every one that’s found is placed on moist paper in a petri dish with a lid to maintain humidity. After a few days, the eggs hatch and each larva is then placed in its own petri dish in a mix of oak sawdust from both bark and wood. The larvae are checked often and moved if necessary to new petri dishes with fresh food. Over time, the larvae develop into pupae. 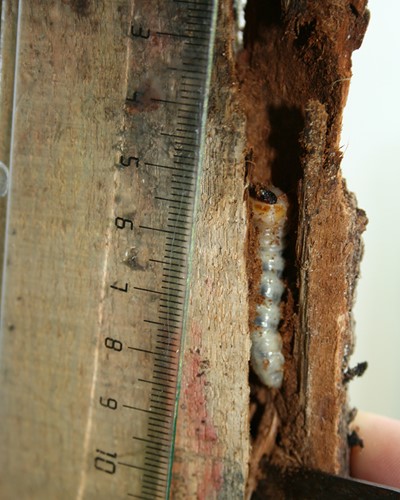 In the wild, the capricorn beetle has a very long larval development of between four and five years. But we can now reduce the natural development time so that in a few years we have a larger number of beetles ready to release. After a month as a pupa, a beetle is hatched, but before it’s fully developed it needs to hibernate in order to be able to reproduce. Following this final stage, the capricorn beetle is ready to be released in restored environments on Sweden’s east coast.